Top Three Best trekking destination in Nepal is the beautiful and the legendary vacation destination of the world. Country of the eight of the fourteen highest mountain in the world trekking in Nepal is the most adventurous activities. Blessed with the natural beauty yearly many people enter in Nepal in order to experience the Himalayan as well as the cultural beauty of the country. Tourism in Nepal is the important aspects of the revenue generation of the country. Nepal has diver landscapes and topography. Rich - culture, tradition and religion, Nepal arts and architecture is the most beautiful feature of the country. As the increased in the tourism sector, the accommodation and other facilities are improving in the trekking region. With the plain fertile land in the Terai, rocky and unique landscapes, with the charming isolated village and beautiful peak in the north. Nepal geographical features also result in a variety of flora and fauna life. Nepal is very rich in natural as well as cultural beauty. Kathmandu is the capital of the country and also known as "the city of the temple" for its numerous Hindu and Buddhist god and goddess. You can enjoy the sightseeing tour of the major UNESCO world heritage sites like Hindu temple Pashupatinath, Krishna Mandir, a Buddhist stupa, Swayambhunath, Boudhanath and another old palace complex like Kathmandu Durbar Square, Bhaktapur Durbar Square. Can enjoy both the tour and adventure trek in Nepal with the expert guide you hired. Trekking in Nepal also provides you the opportunity to taste the local and traditional cuisine. You can enjoy, and experience new things each and every moment of your journey while trekking in Nepal.

The Everest region is also known as the Khumbu region of the northeastern part of Nepal which lies in the Solukhumbu district and also includes in the Sagarmatha zones. Everest region is very famous as the Sherpa Settlements and includes the mind-blowing valley Namche Bazar, Tengboche, Dingboche, Thame, Khumjung. With the elevation of the 3300 meters to the 8848 meters, the summit of the Mt Everest includes both Sagarmatha National park and Sagarmatha National Park Buffer zones from Lukla to Monzu. Everest region also makes you familiar with the snow-capped peaks of Ama Dablam, Lhotse, Nuptse, and many other surrounding peaks. This region is also considered as one of the best regions for the beautiful adventure destination to enjoy the vacation in the entire planets. The Everest Base Camp is one of the famous trekking journeys in this region. Some highlights of the Everest Trekking Region is:

Sagarmatha Nation Park was established in 1976 and before the country's first national parks and listed as the Natural world heritage sites in 1979. Sagarmatha National Park is located in the eastern Nepal and influence over the Mt Everest. It occupies around an area of 1114 Km2 in the Solukhumbu district and elevation is 2845 to 8848 meters at the summit of the Mt Everest. It is touched with the border of the q national of the Tibet. It is extended in the south up to Makalu National parks and south Dudh Koshi rivers. Forest of fire, pine, bamboo, and rhododendron are grown in the park and it is the habitat of the different species of the animals like red panda, snow leopard, Bengal tigers, Himalayan Thars and also provide the habitats to more than 110 species of the birds. 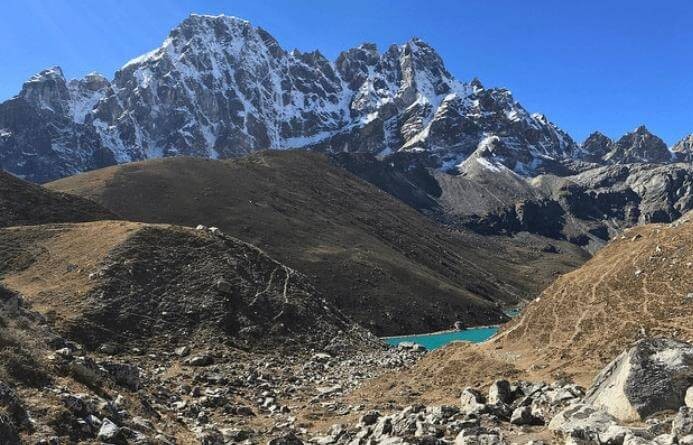 Dingboche is the Sherpa village in the Khumbu region in Nepal and located at the altitude of 4410 meters. Dingboche is the popular stop for those heading to the Everest Best Camp and Ama Dablam. Dingboche is the famous village for the assimilation. One of the characters of the Dingboche village is the kilometer of the paved stone wall which is made using the different size of the stone to cover entire Imja village. The best season to trek is in March-May and September-November, because the visibility of the mountain is beautiful and can experience the natural beauty and the warm hospitality of the locals, however, trekking in the other season is not bad but most of the tea house and lodge are closed due to the cold or bad weather condition.

Mount Everest is also known as the Sagarmatha, the world highest mountain with a height of 8848 meters. Trekking to its base camp is also an adventurous journey in the world. Yearly more than thousands of the people enter in Nepal in order to be in Base of the world highest mountain and its base camp. Mount Everest attracts many climbers some of them are highly experienced mountaineering. There is two main climbing route, one is from the southeast in Nepal and other from the north in Tibet. The summit of the Mount Everest was first climbed by Edmund Hillary and Tenzing Norge Sherpa in 1953 AD. The word Kalapather is translated from Nepali and also known as the black rocked. Kalapather is located on the south ridge of the Pumori above the Ghorek Shep.  Kalapather is the vantage point of the Khumbu region which provides the close views of the world highest mountain Mt Everest and other surrounding peaks like Lhotse, Nuptse, Ama Dablam, and few others. 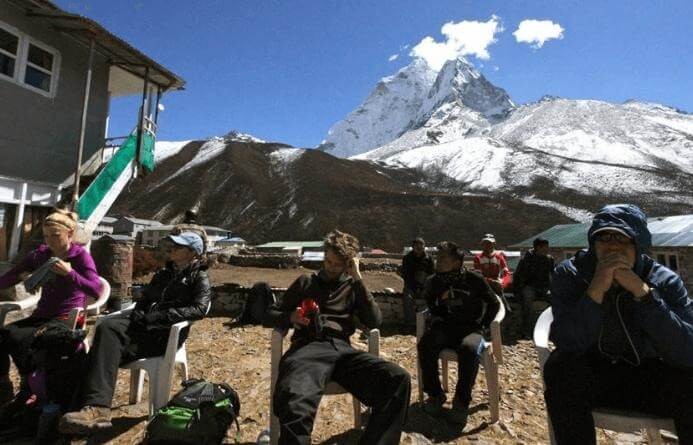 Some highlights of the Annapurna region trekking The second largest city after the Capital city Kathmandu. Pokhara is a famous tourist destination in Nepal. It is also known and the city of Lakes. Pokhara city provides different adventure activities like Bungee jumping, paragliding, boating, rafting and many more. Though the modernization and commercialization are highly developed in this city the purity in nature and the environment is still present. You can also enjoy the short hike to the Sarangkot danda and enjoy paragliding, views of the Pokhara valley, magnificent views of the world highest mountain Mt Annapurna, Mt Dhaulagiri, Mt Manaslu, and other surrounding peaks. Pokhara is very rich in natural beauty and also famous for the lake. Pokhara is a beautiful city to explore in and to enjoy nature as well as Himalayan beauty.

Ghorepani is a beautiful village in the Myagdi District in the Dhaulagiri zones. Ghorepani Punhill Trek lies within the Annapurna Conservation Area (ACA) which require the national park permit to visit, this village contains a number of the teahouse that provides lodges and meals to the mountain trekkers. Many trekkers prefer to overnight at one of the villages of the Ghorepani to enjoy the beautiful surrounding and also people stay overnight to enjoy the sunrise views over the beautiful snow-capped mountain from the Poon hills, to enjoy the phenomenon of the rays melting the snow of the beautiful peaks. Poon hill is the famous and the attractive vantage point to enjoy the gorgeous views of the snow-capped mountains. The Annapurna Sanctuary is the high glacier basin lying at the 40 Km directly from the Pokhara valley, an oval-shaped plateau with an altitude over than 400 meters surrounded by the rings of the mountains, the Annapurna ranges.  The entrance from a narrow the valley between the peaks of the Hiunchuli and Machhapuchre, run-off from the glacier drains into the Modi Khola River, with the unique combination of the heights and the depths on the few days trek (5-7) into the Annapurna Sanctuary give rise to an extraordinary variety of the ecosystems. The entire sanctuary was held at the sacred to the Gurung people(one of the native people of this area).

Some highlights of the Langtang region trekking are Established in 1967 Langtang National parks are the country first Himalayan national park and the country's fourth protected area. With an altitude range of 6,450 meters, it covers an area of 1710 km2 in the district of Nuwakot, Rasuwa, and Sindhupalchok of the central Himalayan region. Langtang National Park is also linked with Qomolangma National Matura Preserve in Tibet. Langtang National Park ranges from upper tropical forest to alpine scrubs and consists of many natural wonders. The ecosystem of the national park include the wide variety of flora and fauna life and it is the beautiful features to attract many visitors. This park offers the trekking, climbing and white-water rafting for the tourists. Plan go click Langtang Valley Trek. The Ghosainkunda Lake is the freshwater lake at Nepal's Langtang National Park, located at an altitude of 4380 meters. The Gosainkunda lake melts and sips down to form the Trishuli Rivers and remain frozen for six months from October to June. Gosaikunda is a significant place of interest on the Dhunche to Helambu trekking route. Gosainkunda area is a famous religious site, Hindu mythology attribute Gosainkunda as the abode of the Hindu site Shiva and Gauri and the water of the lakes are considered holy. During the Janai Purnima and Ganga Dahahara festival, many local people visit the lake by believing that Gosaikunda to have been created by Lord Shiva when he trusts his Trishul (holy trident) so that he could cool his throat after he had swallowed poison. for more details email us: [email protected]